November 8, 2013, Super Typhoon Yolanda (Haiyan) brought massive destructions in Eastern Visayas and nearby regions, leaving thousands of people dead and millions of people affected whose homes were damaged and livelihoods imperiled. Indeed, the world’s climate is changing. These changes tooka vast impact on our ecosystems, human civilization and society. Nowadays, human-induced activities are altering the world’s climate such as increasing the atmospheric concentration of energy-trapping gases, thereby amplifying the natural greenhouse effect that makes the Earth warm. With these undertaking, now comes the never-ending controversy of Climate Change.

Climate change represents one of the greatest environmental, social and economic threats facing the planet. It is the long-term change in average weather conditions, including temperature, precipitation and wind. According to the United Nations Intergovernmental Panel on Climate Change (IPCC), climate change is already apparent as evidenced by higher temperatures, rising sea levels, increased ocean acidity and ice melt. It is a worldwide phenomenon that we can no longer prevent as its effects have become increasingly noticeable. 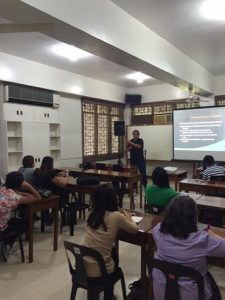 Due to its wide-ranging effects, coastal and marine resources including those fishing families in coastal communities are threatened. Threats include elevated sea level, which may kill coral reefs and other living communities that constitute habitat for fish and shellfish; most traditional fishing grounds are overfished or fully fished thus making it harder for fisherfolk to bounce from disasters; aquaculture investments are becoming risky thus making low profit margins;increased stream temperatures, episodic flooding, saltwater intrusion in heretofore freshwater systems, all of which can reduce the productivity of spawning and rearing waters; and lower pH (decreased alkalinity) of seawater to the point where calciferous zooplankton and shellfish cannot survive. As a result, artisanal fisherfolk across the globe are highly vulnerable to its consequences as compared to other people living nearby their settlements due to their high dependency with the environment and its resources.

For fisheries management, adaptation can be planned or autonomous,for instance spontaneous response to environmental change or planned action based on climate-induced changes. It may be changing the timing or locations of fishing as species arrive earlier/later or shift to new areas. Finding species resistant to salinity and temperature fluctuations for aquacultureon the other handis planned adaptation.A variety of governance actions and policy, specific technical support or community capacity building activities that address multiple sectors, not just capture fisheries or aquaculture farmerscan be included as adaptation in fisheries and aquaculture.

Although adaptation is context-specific, there are a number of adaptation activities that can be applied in most fisheries and aquaculture settings. These include:

These are only few of the numerous adaptation strategies and practices that multiple sectors at the present time continue to promote and advocate. Innovative and new policies have been already developed toempower coastal communities and marginalized sectors in the fishing industry. One is the Community-Based Coastal Resource Management (CB-CRM), an approach that centers on the role of communities in the management of their resourcesand their rights to enjoy the benefits resulting from their collective action.The rights and interests of these indigenous peoples and local communities must be at the center of any successful and sustainable policy to address marine and coastal degradation and deforestation. That is whyTambuyog Development Center, a non-government organization founded in 1984 as a result of research and organizing in Lingayen, Pangasinan by the University of the Philippines College of Social Work and Community Development is appealing for attention to the declining fishery resources and unabated poverty in coastal communities through interdisciplinary research, creative information and education campaign, community organizing, policy advocacy, constituency building, community enterprise development andeven gender inequality for women who are oftentimes misinterpreted, miscalculated and considered“the invisible fisherfolks”.  As diverse as the women’s role in fishing activities and their multiple task in ensuring the survival of their fishing households, almost always their participation are not counted in the final production outputs, because women are reflected only extensions of their male counterpart.

Organize interdependent communities of empowered women and men sharing responsibility and enjoying benefits from the sustainable management and development of Philippine Fisheries are part of Tambuyog Development Center’s vision. One of their missions is to contribute to the empowerment of fisherfolks by developing broad and dynamic unity among stakeholders in fisheries development at the local and national levels towards community property rights. Finally, their ultimate goal is to reinvigorate CB-CRM practices and work towards an enabling policy environment with emphasis on optimizing benefits from community property rights and improving market access for women and men engaged in municipal fisheries in the Philippines. This shall be achieved by strengthening fisherfolks organizations of women and men, building networks and alliances, advocating policy changes, shaping public opinion and facilitating timely and relevant information flows.

Almost two years after the Super Typhoon Yolanda (Haiyan),survivors especially fisherfolks are still on the battle of an interminable issue on rehabilitation and recovery. The Department of Agriculture projected that 202,410 fishing households were affected in Central Visayas and Northern Palawan. Fisherfolk communities were given support by the government, citizen organizations, and the private sector in boat repairs and new fishing gears. However, fishers are still facing declining catch after the typhoon damaged fishing grounds and the marine ecosystem.

A 40-meter no-build zone policy was issued last March by Office of the Presidential Assistant for Rehabilitation and Recovery (OPARR). The agency later backtracked on this policy after critics pointed out that this does not consider the means of supportthrough livelihood and geo-hazards in different areas. OPARR later committed to a Joint Memorandum Order together with the Department of the Interior and Local Government (DILG), Department of Public Works and Highways (DPWH), Department of Science and Technology, and the Department of National Defense on safe, unsafe, and controlled zones but this has not been issued yet.

The Local Government Rehabilitation and Recovery Plan (LRRP’s)   for Cebu, Iloilo, Eastern Samar, Leyte, and Tacloban City have already been approved by the President. As of July 2014, the Government Clusters have vetted the LRRPs for the remaining provinces of Palawan, Masbate, Aklan, Antique, Capiz, Negros Occidental, Biliran, Southern Leyte, and Dinagat Islands. For infrastructure, the primary goal is to build back better by rehabilitating and improving infrastructure to support recovery and rehabilitation as well as the enhancement of disaster resiliency of affected communities.Correspondingly, social services cluster aims to facilitate delivery of basic services such as education, health, and social protection services to affected communities as well as provide healthy environment and strengthen capacity to cope future hazards and disasters. Resettlement and livelihood cluster plan, on the other hand targets to relocate affected families living in hazard prone areas to safe areas and to develop sustainable and disaster resilient settlements in orderto achieve inclusive and sustainable business for their livelihoods.

All these issues and advocacy calls, may it be from fisherfolks, farmers or any other sectoral groups were never given importance (if given, taken for granted) only until Typhoon Yolanda came that it turn out to be a prevailing noise. Almost two years from now when the strongest storm in recent history has brought the strongest act of humanity, embracing a nation of survivors and while we continue battling on these several arguments, the question still remains: Where are we now?