On August 12, 2015, the Committee on Ecology, which was presided over by Congressman Amado Bagatsing, approved House Bill ___ or the Integrated Coastal Management Bill on first reading. The Bill’s principal sponsor, Party-list Representative Raymund Democrito Mendoza of the Trade Union Congress of the Philippines thanked the NGOs for Fisheries Reform, Inc. (NFR) in assisting in the refinement of the ICM Bill. NFR in collaboration with the UNDP PEMSEA, the Department of Environment and Natural Resources through the Biodiversity Management Bureau, German Technical Cooperation and the Department of Agriculture through the Bureau of Fisheries and Aquatic Resources conducted regional consultations, which culminated in a Technical Writeshop that resulted in the draft substitute bill. 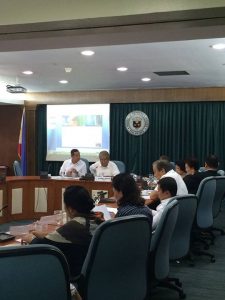 Committee on Ecology Chairperson Amado Bagatsing presided over the approval of the Committee Report on ICM Bill in the House of Representatives.

One of the salient provisions of the ICM bill is the integration of coastal management, climate change adaptation and mitigation and disaster risk reduction and management. This is in recognition of the increasing vulnerability of low lying coastal areas to climate hazards. The Philippines is also considered to be the 2nd most disaster prone country in the world. Another significant provision is the mainstreaming of integrated coastal management in existing local development plans. Consequently, local development councils, from regional down to cities and municipalities, play instrumental role in the conservation and management of important ecosystems by ensuring that ICM plans are institutionalized and budgets are allocated. Reporting and accounting of the conditions of coastal and marine resources are underscored through the regular publication of State of the Coast Report.

The Senate, meanwhile, has yet to act on the proposed bill, Senate Bill No. 100, which was filed by Senator Loren Legarda. The Committee on Environment and Natural Resources in the Senate is currently being Chaired by Senator Chiz Escudero.