DISTURBING. This was the first reaction when the team of the office of the Cabinet Secretary visitedfor a dialogueand finally heard all the sentiments of the fisher folks and community members in Tacloban City last February 19, 2016.

More than two years already since Super Typhoon Yolanda hit and brought massive destructions in Eastern Visayas, leaving thousands of people affected whose homes were damaged and livelihoods being imperilled. Most part of Visayas especially in Leyte, the conditions of most of the survivors particularly the fisherfolks living along coastal communities is still far from the normal conditions.

Losanto Castillo Jr., a resident of Brgy. 88 Fisherman’s Village argued on thereluctant support of the government in prioritizing their immediate needs. He mentioned the construction of the Tide Embankment project instead on the fast tract of the unfinished permanent housing resettlement. Based on the report of the National Housing Authority (NHA) presented before the House Special Committee on Climate Change of the House of Representatives last October 22, 2015, of the 205,128 housing needs for 12 provinces affected by Yolanda, only 3,424 has been completed. In the case of Tacloban City, the progress is still very slow with only 660 completed permanent housing units against the 14,433 total housing needs that were identified by the local government. And yet, even these completed housing units in the resettlement area are faced with complaints and protests such insufficient basic social services around, lack of potable water and livelihood concerns.They also mentioned some casesthat they were not allowed to go back to their houses due to the pronouncement of the 40-meter ‘no build zones’. They stressed out that there were no public consultations conducted by the government on the policy on Safe, Unsafe Zones, and No Dwelling Areas and that this policy only came about right after the typhoon Yolanda hit their communities. If asked from whom they learned this information, all they can think of are the markers put up by the Department of Public Works and Highways (DPWH). They have always heard that the reason for the 40 Meters No Build Zone is to keep them away from the dangers of flooding, river overflow and storm surges however without even proper consideration, recognition and protection of their rights as internally displaced persons. Aside from preventing them from rebuilding their houses, they referred No Build Zone to the Department of Social Welfare and Development’s (DWSD) Emergency Shelter Assistance (ESA) Program that came very late after typhoon Yolanda which amounts to Php70000 for totally damaged houses and Php30000 for those with partially damaged. And yet, after another parameter released by DSWD in Tacloban City pertaining to this green card and sharer-renter condition, the emergency shelter assistance suddenly decreased to Php30000 for totally damage and Php10000 for those partially damaged.  According to them, this same policy was used by DSWD to deprive many survivors of the cash grant. Nestor De Veyra of Brgy 31 and Carmen Sarilas of Brgy 48-A were only few of the many survivors who received nothing andonce again became victims of this injustice selective giving of assistance because according to them, they are within the 40-meter no build zone. The office of the cabinet secretary then strongly argued that the no-build-zone policy has nothing to do with the emergency shelter assistance. As quoted, “wala pong kinalamanang no-build-zone para hindipo kayo makatanggap ng ESA. Lahatpo ng nasalanta at nawalan ng bahay ay dapatnibigyan kaya ngapoumabothanggang July 2014 bagopo mag release kasiayawpo ng Pangulonamagkamali”.

On a different note, Carmen Sarilas, an occupant of Brgy 48-A shed in tears as she shared about the demolition of houses in their neighboring barangay after Department of Public Works and Highways (DPWH) made a house to house ocular visit.At first, she thought that the group came for relief and assistance, however, the next visit ended up with the destruction of houses.She remain in fear that possibly anytime soon, their homes will also be demolished because of this Tide Embankment Project. Nevertheless, she clearly pointed out, “Hindi namanpo kami against sa tide embankment project, angsaaminlangposana ay kung papaalisinpo kami saamingmgabahay ay may tamangsuportapokamingmatatanggap at may maayoskamingtitirihan”. (We are not against the Tide Embankment Project, what we only want is to be given sufficient support and humane settlements in case we are asked to leave our homes).

Indeed, the immediate concerns identified by the survivors at the start of the rehabilitation work by the government remain unresolved two years after the strongest typhoon in history made landfall.A lot of international and local non-government organizations have long been involved with the issues besetting the rehabilitation of Yolanda-affected communities especially in coastal areasyet, still need for a continuous reinforcement especially through government efforts. A need for onsite fisherfolk resettlement is what they strongly propose. If there are available lands that are near the sea and if the LGU can pay for the purchase of land, a permanent resettlement should be established. The resettlement area, however, should have complete basic social services such as clean and potable water, sanitation and electricity, among others. Moreover, they also need for resourceful and sustainablealternative livelihoods such as mussel & oyster culture, center house and drying technologies for fish drying, capital for peddling (e.g. sari sari store) and food vending as other sources of income.

Ms. Rowena Bolinas fromoffice of the cabinet secretary stated in her final response,“Typhoon Yolanda stories and issues are something not new to all of us. However, it is very disturbing and totally upsetting to finally hear your sentiments and concerns. We came here because we wanted to know as much as possible the specific details if the reports submitted to us by the implementing agencies are really accomplished or not. We also would like to encourage you to do your part as beneficiaries because this whole process is a tri-part recovery and rehabilitation effort coming from the national government, local government units and the beneficiaries. This is a give-and-take relationship that we need to work together and if in times of insufficient support from our LGU or NGO’s, you can still manage to work on sustainable means of support to continue your way of living just like before Typhoon Yolanda. Nonetheless,we thank you for being honest and open in sharing all your sentimentalities. Rest assured that we will relay to the proper authorities and communicate these to the relevant government agencies”. 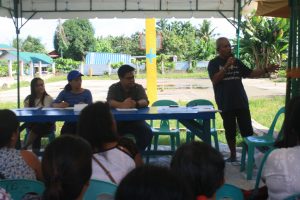 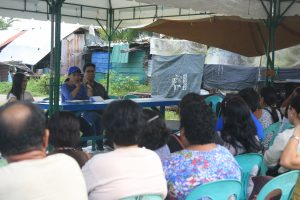 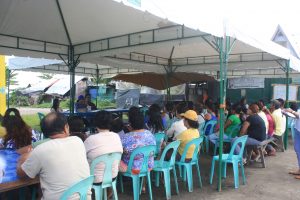 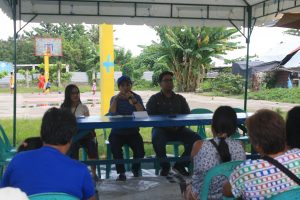