Ownership, consultation and lack of clarity in the beneficiaries’ criteria were the major concerns of the fisherfolk leaders who attended the consultation on the proposed Department Administrative Order by the National Anti-Poverty Commission for the Department of Agriculture-Bureau of Fisheries and Aquatic Resources’Fisherfolk Settlement for Stewardship Program last December 17 2015. There were just 3 of the 5 concerns and recommendations raised by 25 fisherfolk and community leaders from MacArthur, Palo and Tacloban City in Leyte as well as fromMarabut and Basey, Samar who were present during the consultation. 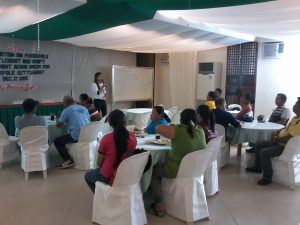 During the consultation, the status of the Fisherfolk Settlement program, the Admin Order Draft supporting the said program as well as its featured highlights, was presented to the community and fisherfolk leaders in order to inform them as well as to consult them for their feedbacks and recommendations on the said administrative order. A forum was then opened and facilitated by Mr. ErloMatorres of NFR for the stakeholders to express their concerns, suggestions and recommendation about the administrative order. 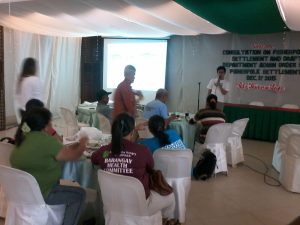 Majority of the concerns expressed by the fisherfolk were about why they should be paying when they never really get to own their settlement and their land, why the government would be shelling money for the land when the land they need is already provided by the LGU, the need for beneficiaries to take part in and be consulted in the identification of the resettlement sites as well as the administrative order’s lack of specific criteria for who gets to be a beneficiary of the said program. The stakeholders on the other hand, suggested and recommended that options for tenurial security on the part of the beneficiaries should be explored, that there should be at least be a certificate of occupancy for the beneficiaries if they do not get to own their settlement, that the beneficiaries get to take part in the construction of the settlement instead of contractors as counterpart and that the beneficiaries should also be involved in choosing the settlement area so they get to see if it is safe while at the sametime making their fishing areas accessible.

After the consultation the stakeholders present drafted and signed a letter expressing their concerns about and support for the draft Administrative Order as well as their support for the Fisherfolk Settlement Program.