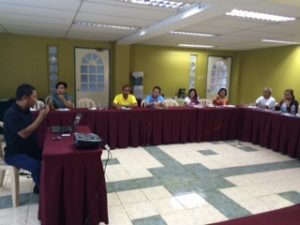 The NGOs for Fisheries Reform, Inc. (NFR), the Tacloban Fisherfolk Urban Association, women fisherfolk in Kankabato Bay and in northern barangays of Tacloban City, some members of the Artisanal Fisherfolk Sectoral Council of the National Anti-Poverty Commission (NAPC) and other civil society organizations assessed the implementation of the Fisherfolk Shelter for Stewards Program, which was funded by the Department of Agriculture-Bureau of Fisheries and Aquatic Resources (DA-BFAR). The evaluation was held at the PHILDHRRA Partnership Center in Quezon City last April 25, 2016.

The NAPC pilot tested the fisherfolk settlement program in 13 coastal municipalities. Coastal areas were severely affected where around 205, 128 houses in danger zones have been severely affected by Super Typhoon Yolanda. Government’s response to housing needs following the devastation of Yolanda is wanting. The primary challenge in making swift interventions in terms of relocating people in danger zones is the bureaucratic process that land-related permits and documents need to undergo from one department to another. Policy such as the Joint Administrative Order 01 series of 2014, which provided guideline on the determination of safe zones, unsafe zones and no dwelling zones does not consider the possible impacts to lives, livelihoods and well-being of people living in danger zones. Yolanda survivors were not satisfied as well with programs initiated by local government units. 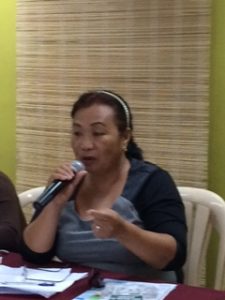 Section 108 of Republic Act 8550 or the Philippine Fisheries Code of 1998, which appeared as Section 141 in Republic Act 10654 that amended the former, mandated the DA-BFAR in coordination with other government agencies to determine fisherfolk settlement areas that are near the sea. In the recently formulated Comprehensive National Fisheries Industry Development Plan (CNFIDP) by DA-BFAR, Php300 million per year starting 2017 has been allocated for fisherfolk settlement.

The forum led to the discussion on the possibility of having a memorandum of agreement between the DA-BFAR and the Department of Environment and Natural Resources to facilitate the identification of suitable sites for fisherfolk settlement as well as the one stop shop for faster issuances of land-related permits and clearances. It was also raised that there is a need to re-convene the National Inter-Agency Task Force on Fisherfolk Settlement, which was composed of representatives from concerned government agencies, fisherfolk and civil society organizations to sustain the implementation of the FSSP.