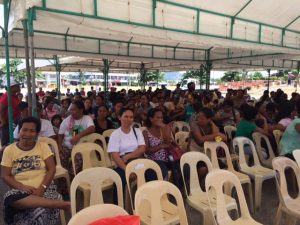 Almost seven hundred artisanal fisherfolk, fish and seafood processing fisherfolk, fish vendors, divers, seaweed farmers as well as coastal area settlers from all over Tacloban City have gathered at the RTR Plaza,Tacloban City last April 12 to come face to face with the local candidates running for office this coming elections.

Among these fisherfolk, five leaders representing Women fisherfolk, Fish vendors, Artisanal fisherfolk and the City Fisheries and Aquatic Resources Management council sat down as panellists asking these candidates about the plans they have in store to address the serious concerns and issues being experienced both by fisherfolk and coastal communities.

One of these panellists, Mr.Modasto Donsal has expressed grave concern about the small fish vendors’ difficulty in accessing and getting to keep their fish vending stalls due to the high rate of stall rent they cannot afford at the public market. One of the candidates, namely, incumbent Vice Mayor Jerry Yaokasin, responded and admitted that there is not enough fish vending stalls and that the council is experiencing challenges in terms of regulating expensive the rental rates in areas around downtown Tacloban. Moreover, Yaokasin mentioned the possibility of drafting or sponsoring an ordinance on lowering market stall rental rates at a 50% for small fisherfolk vendors.

The need for alternative Livelihood, livelihood support and technical capacity building, on the other hand, raised by one of the panellists, Mrs.Saleha Badidles, who was once a beneficiary of a program on fish processing that did not succeed after their livelihood was affected by typhoon Haiyan. One of the candidates namely Neil Glova, then, stated that the city LGU’s current programs focused too much on home economics and aesthetics and that lacked enterprise support for boosting support for farmers and fisherfolk. Glova also stated the need for City Fisheries Office to ensure support to local fisherfolk since City Agriculture Offices tend to focus more on Agriculture than fisheries. Yaokasin, on the other hand, brought up the possibility of ecotourism as the source of alternative livelihood for fisherfolk who are willing to give future tourists a tour of Kankabato Bay.

Of Pollution and Alternative Solutions

Another emerging issue during the forum was the case of pollution in Tacloban City’s mariculture areas. The fish cages from Tacloban North and Cataisan point in San Jose as well as the seaweed beds along Cawayan Point are running the risk of damage and contamination from being exposed to debris from Typhoon Haiyan and runoffs from residential areas, industrial establishments and dump sites near the coastal areas according to two of the panellists namely, Charito Budano, a seaweed farmer, and Losanto Castillo Jr, who operates fishcages with his association at San Jose. The candidates, on the other hand, who have responded, emphasized that the solving the problem of coastal pollution lies not just in the hands of the LGU but of the people as well given that most of the violators of the ordinance against garbage dumping in the seas still are predominantly seaside settlers. According to the candidates, they promise to address the issue in terms better prioritization given that the problem on waste management in in general, is an issue that is already very obvious but at the same time very understated and hardly being prioritized when it comes to the implementation of local programs and ordinances.

With the case of Kankabato Clean-up and retrieval, all the candidates have agreed that the annual budget for the development of Kankabato Bay needs to be utilized for the clean-up and that the ongoing clean-up should carry on, be given budget and be implemented better regardless of who gets to elected as local chief executive. One of the candidates, namely, Larry Menzon, also emphasized the importance of assessing the bays first before conducting clean-ups to prevent doing more damage than help to the remaining corals and seagrass on the coastal cleanup site. The candidates were also proposing and very much in favour of mangrove area management as a potential source of income to fisherfolk.

On the issue of resettlement and its implications to fisherfolk which was raised by all the 5 panelists, the candidates expressed their concern for the lack of consideration given to the fisherfolk transferred to areas far from their fishing grounds and similarly agreed on supporting onsite resettlement with proper evacuation centers.

The issue on Tide embankment, as raised by Castillo Losanto Jr, also brought similar responses from the candidates who all happened to be against the building of walls around the city’s coastal areas. All the candidates were more in favour of mangrove areas protecting coastal zones instead of huge dikes or seawalls for the reason that “infrastructure projects will only make thieves happy and that having heightened seawalls will likely make the flooding problem in Tacloban worse”, according to majority of the candidates.

Majority of the candidates, who also are incumbent local legislators, explained that there are already  laws on environmental protection as well as those against common problems like dumping of sewage into the sea are illegal fishing and that the problem still lies largely in implementation and prioritization. Since majority of the candidates came from one party, they all believed that voting their standard bearer would be the solution to increase the likelihood of their proposed legislations and priority programs they claim to be in favour of the marginalized sector, especially the fisherfolk.

Some fisherfolk issues, on the other hand, like the possibility of on-site resettlement and making revisions in the  Comprehensive Land Use Plan that are in favour of coastal settlers were never opened nor mentioned by the candidates during the discussion. The same case goes for the plans on what should be done about waste water management which was also hardly discussed. Also, the LGU-initiated strengthening of FLET and the CFARMC through increased funding and capacity building was also merely mentioned caught-in-passing and not given much emphasis.

At the end of the Forum, the candidates for councillor Raissa Villasin, Larry Menzon, Jose Mario Bagulaya, Atty. Jerry Uy; Vice Mayor Candidate Jerry Yaokasin and Mayor Candidate Neil Glova shook hands with the panellists, expressed their support for the Fisherfolk agenda and signed “THE FISHERFOLK AGENDA” banner along with the panellists and participants in the forum. 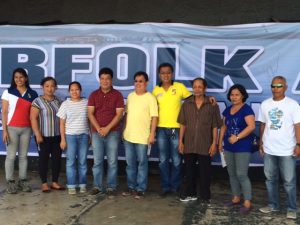 Majority of the Candidates present were running under LP with their standard bearer, Neil Glova. Vice mayor candidate Jerry Yaokasin, is on the other hand, running independent. Although the candidates present in the forum happened to consist mostly of members from one  party, NFR is not promoting nor campaigning the candidates mentioned or present durng the forum.

The secretariat has invited candidates from both the parties of Neil Glovaand Cristina Romualdez but majority of the candidates under Romuladez, including Romualdez herself, were unable to attend the forum for the reason that they have individual prior commitments on the same day. The availability and unavailability of the candidates who have attended the Fisherfolk Agenda Electoral Forum is beyond the control of the NFR Secretariat who have hosted the said event.